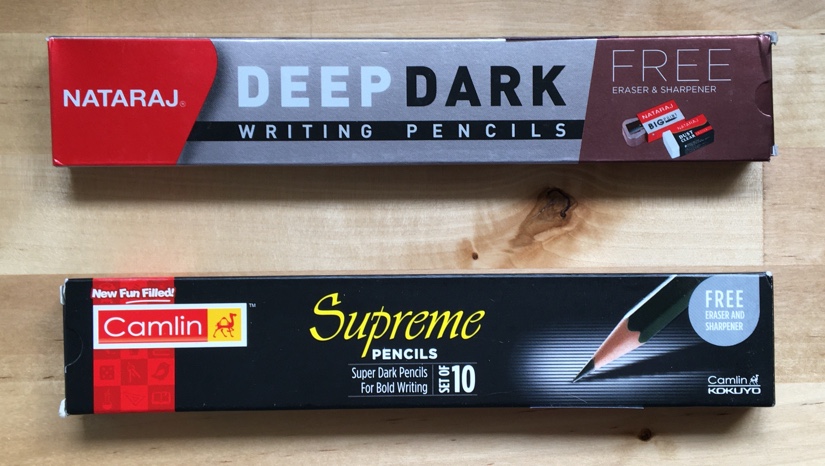 My curiosity about Indian pencils started a few years ago when I read Priya’s review of the Nataraj Marble Pencil at The London Parchment, I was impressed and promptly scoured eBay where found them for sale by the barrel. Each barrel contains a hundred pencils at an insanely reasonable price; and yes, you guessed it, I bought them. In fact, I bought two so now I own two hundred marble pencils!

Aside from being a good quality pencil no two are the same, as I understand it as part of the manufacturing process each pencil is painted individually and from checking the barrels I have, I can’t find two the same; similar yes but not the same.

So, recently, I was wandering around eBay and I decided to search for Nataraj just to see if there was anything new or unusual, there wasn’t; all the usual suspects showed up and whilst looking at the listings I noticed that a seller (Zofaxworld) was advertising packs of Nataraj Deep Dark and Camlin Supreme pencils; both packs of ten and both including an eraser and a pencil sharpener.

I sent my pennies for a box of each and a couple of days later a package arrived.

Before I go any further, for anyone who has not heard of either of these companies; they are both based in India and are large manufacturers of a wide range of pens, pencils and other stationery items. To give an idea of the scale of these companies Nataraj manufacture approximately 8,000,000 pencils per day and that is before you add on all the other things they produce.

Anyway, back to the pencils.

I decided to put them to the test with some basic comparisons.

Firstly, appearance, both are a standard hexagonal pencil, fully painted except the bottom edge where you would sharpen it, the Camlin is black with cream and gold bands near the top and the company name and model, Supreme, are printed in gold on the main body of the pencil. The Nataraj is painted silver with alternate sides over painted in maroon, on one of these is printed, in silver, the company name and the model name ‘Deep Dark’.

The Camlin comes pre-sharpened and Nataraj is unsharpened; I tested both with a KUM Long Point sharpener and both of them produced sharp durable points; the Camlin sharpener, when tested, only produced a standard point whilst the Nataraj, described by the company as a ‘Big Point’ sharpener, produced a point very similar to the KUM Long Point.

For the last test, I took the graphite out for a spin which included scribble, lines, text and shading/erasing and just as a point of reference I’ve added samples from the Blackwing 602 and the Tombow Mono 100 2B. Both the Camlin and the Nataraj did very well but when it came to it the Nataraj produced darker samples than the Camlin; so, I would guess the Camlin is a HB and the Nataraj is a B.

Finally, are these pencils worth your pennies? The simple answer is “Yes, they are.”

Both packs of pencils were less than £3.00GBP from Zofax World, including free postage. So really the only choice you need to make is between the grade of the graphite you prefer and then place your order; and if you have the time I would suggest looking around their site as they carry a range of makes you may not have heard of but everything seems to be very competitively priced.

Disclaimer: The pencils were purchased with my own funds at retail price. The opinions expressed in this review are my own; and I am not connected with either the retailers or manufacturers in any way.