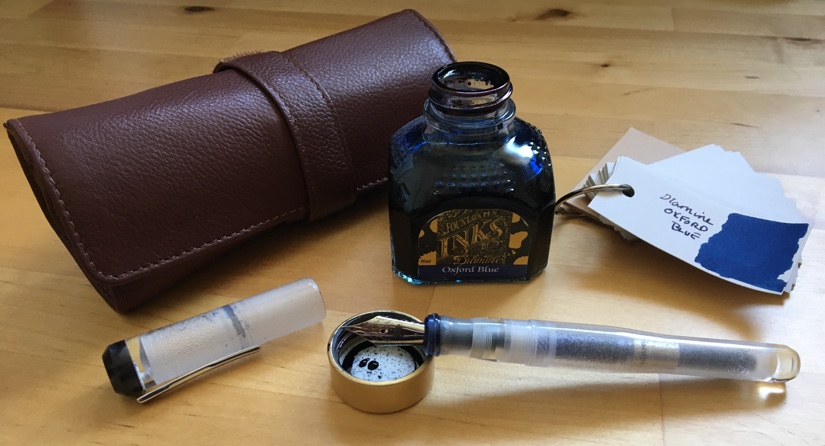 Well over a year ago I read a review (UK Fountain Pens) of the Franklin Christoph Model 02 and I decided to order one. I chose the Smoke & Ice version with a standard Medium steel nib, placed my order and then addictively watched as it travelled round the world with FedEx, arriving at my door a few days later.

I have to admit when I opened the package, I had mixed feelings about the design but decided to try it out anyway with the intention of reselling it if I didn’t like it. 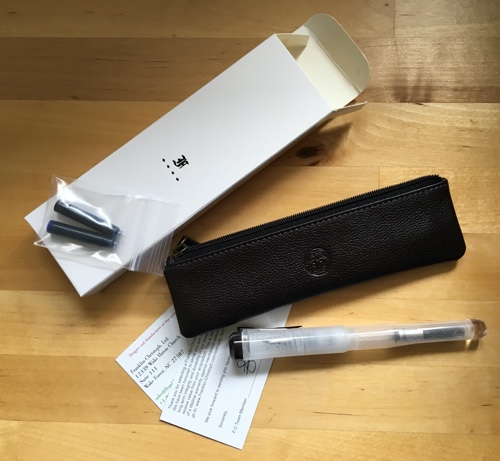 Ok, before I go any further let me take you on a quick tour of the pen.

It is a cartridge, converter, eye dropper pen with the barrel, section and cap all being made from clear acrylic except for the cap finial which is made from a smoky grey acrylic hence the name smoke and ice; and with the exception of a couple of polished areas, the barrel finial and the area just below the cap finial, the clear acrylic is frosted.

The smoky grey finial has chamfered shoulders and engraved on the top is the Franklin Christoph logo and four diamonds; the diamonds are repeated down the clip and about 8mm from the bottom edge of the cap is engraved, very discretely, the company name and the model number 02.

It takes a single twist to remove the cap and reveal the section; the section is relatively short at around 22mm long and only lightly frosted compared to the barrel and cap. The threads for the cap are smooth and flat and at the nib end of the section which ensures they do not affect the comfort of the writer’s grip.

The nib is a #6 engraved with the Franklin Christoph logo which worked perfectly straight from the pouch. If you’ve never bought from FC, they supply all their pens in a very nice quality leather pouch.

Finally, the barrel. The threads that link it to the section are very well done and consequently with the application of a little silicone grease the pen will safely convert into an eye dropper; if you’ve never set up a pen as an eye dropper then I would recommend practising with water first and only the lightest application of grease as you do not want this clogging the pen.

There is a neat trick with the barrel on this pen, it has what FC call, a ‘centre barrel taper’ which  put simply means that around half way along the barrel it tapers noticeably which is what gives it its unique shape and allows the cap to post deeply. Approximately two thirds of the barrel length will fit inside the cap, so, if you prefer to post your pens you will find this becomes a substantial pen.

Like I said the ‘neat trick’ is the centre barrel taper which changes how the pen feels when you are writing with it, unposted (I would always recommend using this pen unposted), it changes it from a bulky pen to a comfortable pen with the taper resting just where my thumb meets my hand. Which means you don’t have to make allowances for the shape of the pen as you would had it not had the taper. 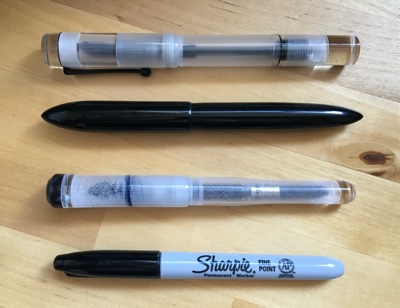 Now to get back to the very beginning and explain how this pen became “My Accidental EDC Fountain Pen”, it’s quite simple I tried it out, I really liked it and I’ve been using it ever since. It has become a permanent resident on my desk along with my Ranga 8B and my Platinum Carbon and I wouldn’t be without it.

So much so that I want another; but this time made from FC’s elusive Italian Ice acrylic, which sells out so fast it’s a case of blink and you’ve missed it. I even emailed FC once to see if they accept custom orders and their ever-wonderful customer service very politely explained to me that they don’t.

I definitely recommend this pen, what looks like quirky design is, in fact, a very clever piece of design that makes this pen probably the most comfortable everyday pen you can buy.

However, at $175.00USD* it is not the cheapest pen on the market but for a pen that is this comfortable to use that it becomes an everyday pen without trying; then the investment makes perfect sense. Think of it like this if you use it most days it’ll cost you around $0.75USD per day, or less, for the first year and after that it’s free.

Anyway, I will leave you with my recommendation and just say that I’m sure if you decide to buy one you will like it.

Disclaimer: The fountain pen was purchased with my own funds at retail price. The opinions expressed in this review are my own; and I am not connected with either the retailers or manufacturers in any way.