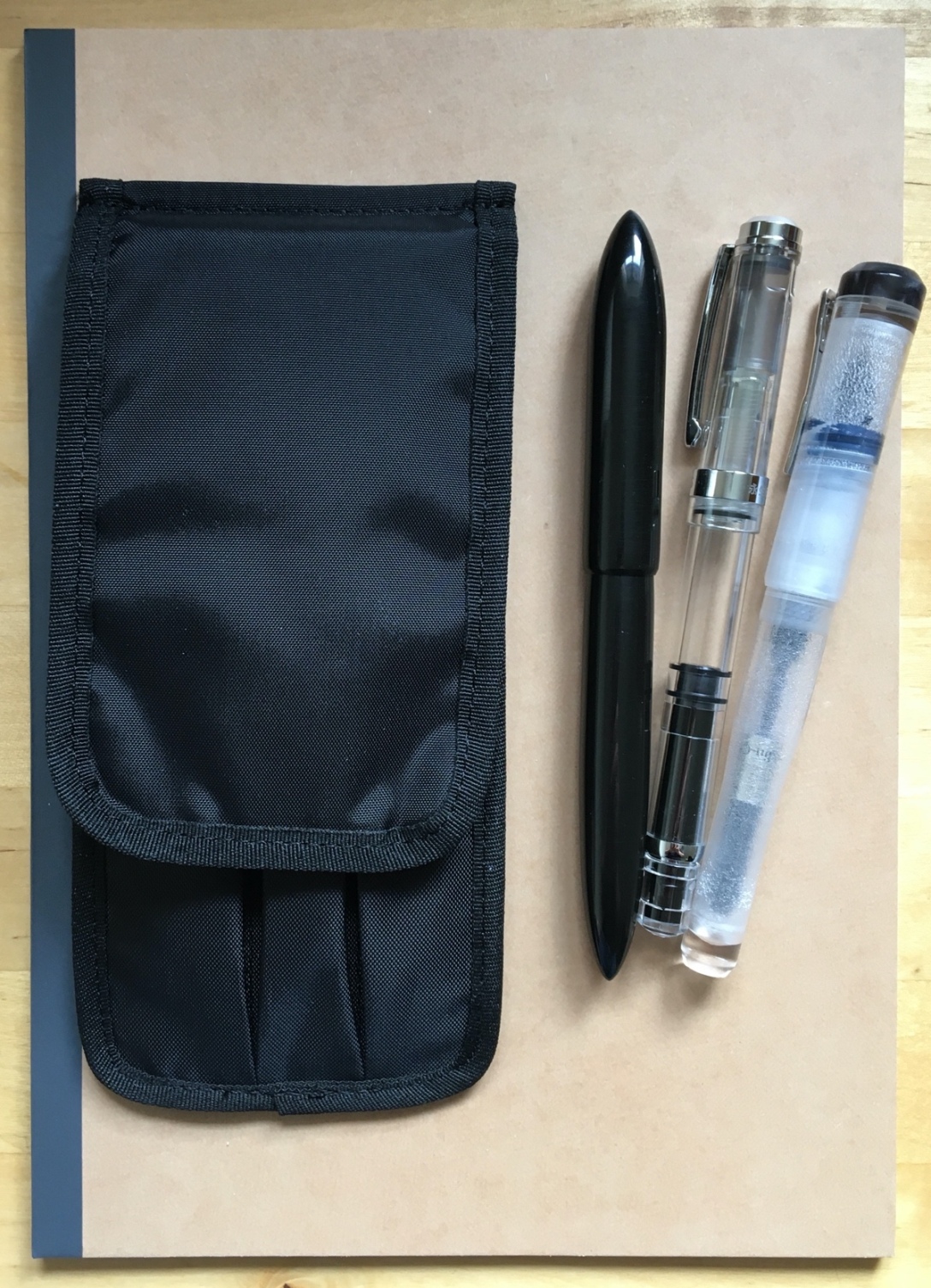 Once upon a time Muji decided to make a nylon cosmetic brush case and shortly after that I went into a Muji store and thought “Wow, that could make a good pen case”; and a few minutes later I left the store and with two cases and some other ‘very necessary’ stationery purchases.

To give you some background on the above. I have, for quite some time, been looking for a durable but inexpensive pen pouch/case that could live in my work bag and if it got damaged, I could just replace it and it wouldn’t be a big deal.

Then the other day I found myself in Muji just wandering around the store with no real purpose and I wound up in front of the cosmetic bags and I was just about to turn around and head back to stationery when the brush case caught my attention and I picked one up and as I was looking at it was literally a light bulb moment. The bulb went on and I realised that the brush case I was holding was simply a variation on a pen case and it was, potentially, what I had been looking for, for all this time.

It’s not a very big case (approximately 85mm x 190mm) and it’s made from lightweight black nylon (so don’t expect bullet proof protection), it has a very lightly padded flap that when closed is secured by a small piece of Velcro attached to the flap and its counterpart on the middle of the three brush/pen pockets.

When you open the pouch, you have three pockets for pens and above these are two clear plastic flaps which would normally protect the brush heads but are now protecting the caps of the pens. The back of the pouch is stiffened, at a guess, by a sheet of card slipped between the layers of nylon that form the rear outer shell and the inner lining and this also has the same light padding as the flap.

So, as you will have gathered this pouch has three pockets for bushes which I am now using for pens and when I first opened it because cosmetic brush handles can be quite slim I wasn’t expecting it to be capable of holding much more than something along the lines of a Pilot G2.

Happily, I was wrong, and I currently have three of my chunkiest pens in it; my Ranga 8B, a Wing Sung 698 and a Franklin Christoph Model 02. All of which fitted without being forced leaving about half an inch at the top of the pouch which helps the flap to close easily.

For the sake of curiosity I tried a couple of pencils and you should be ok with standard size pencils, I tested with a new Muji 2B and a Blackwing 602; the  Muji was fine but the Blackwing was too long, however, mechanical pencils as long as they are roughly the same size as a G2 should be fine. I also tested a Sharpie and that was fine as well.

At this price, £3.95GBP, there is no need to ask if it is worth your pennies because it is; I am more than happy to recommend this as a budget pen case. It’s ideal for dropping in your work bag, it’s nylon so it is easy to clean, and it will hold three good sized pens and if you want to carry more than three pens additional pouches are very affordable.

Disclaimer: The brush pouch was purchased with my own funds at retail price. The opinions expressed in this review are my own; and I am not connected with either the retailers or manufacturers in any way.