Blue Cashmere came out of the same project as Red Cashmere; the project was working on powdered inks and then moved on to gel inks that you could mix yourself which would enable the user to blend an ink that exactly met their requirements. Eventually for one reason and another the powdered and gel inks project was wound up and Blackstone started making the SuSeMai inks and they really are something special.

Blackstone are a very ethical maker of inks that are certified as vegan friendly, and I would like to quote from their website to highlight how serious they are about this:

Blackstone inks do not contain glycerine, a humectant and lubricant often used in inks, that is usually derived from animal by products.

So, for anyone with ethical boundaries about products used in ink production, Blackstone Inks are definitely a manufacturer you want to check out.

The ink itself ships in a small 30ml polypropylene bottle that is fully reusable or recyclable and according to their site can be frozen, dropped on the floor and generally kicked around and suffer only minimal damage, because it really is that tough.

When you open your bottle of ink the first thing you will see is the seal and this seal is as tough as the bottle because just like the bottle Blackstone are determined that your ink is well protected and won’t leak. 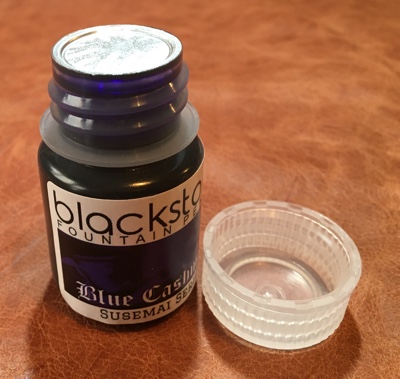 Once past the seal you will see that despite it being a small bottle it the neck is not correspondingly small and should accommodate pretty much any fountain pen.

Using a Q-Tip I did a patch test and a stripe test; building up the latter to see how deep the colour would go. The top is the first pass, the middle is two passes and the bottom is three passes and you can see how the depth of colour builds up. One thing I did notice was even though the depth of colour built up well the ink did not show any signs of sheen; so if you like sheen this is probably not the ink for you, what I would suggest, in that case, is Berlin Notebook No.1, a wonderful blue ink with amazing sheen.

The text test, using a dip pen, came out as a nice mid to dark blue, but not so dark that it would pass for Oxford Blue but still dark enough for you to see the depth of colour. When writing, the ink was very smooth and flowed at a steady pace keeping up nicely with the nib, so I did not experience any skipping. All in all, it’s a very nice ink to use and I think it’s suitable for either work or personal use. 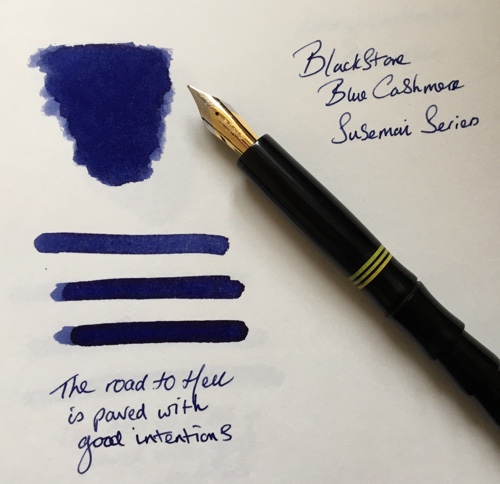 It retails around £10.00GBP but if you shop around it can be found for less; and if you haven’t tried Red Cashmere then I recommend you drop one of those in your basket as well, it’s a really nice red.

Now the bad news, like Red Cashmere, Blue Cashmere is a limited-edition ink so it won’t be around forever; my advice is if you think you will like it buy two because when it’s gone it’s gone.

Disclaimer: The ink was purchased with my own funds at retail price. The opinions expressed in this review are my own; and I am not connected with either the retailers or manufacturers in any way.