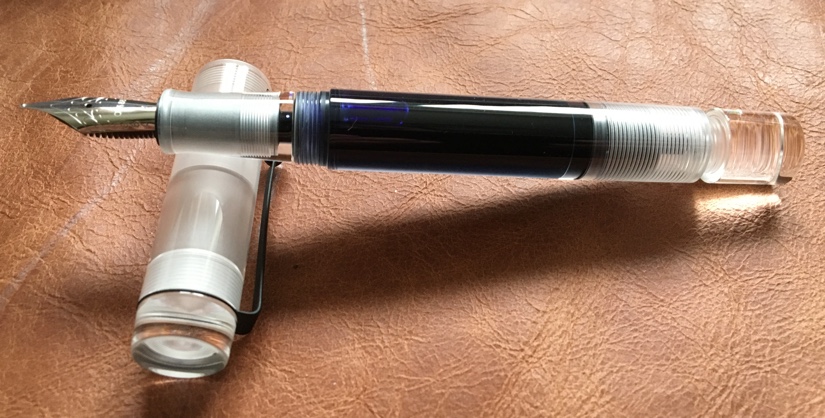 Ok, before I start the review, I should warn you that this is a coffee and cookies review, by which I mean it’s a bit longer than my usual reviews so get comfortable with your beverage and snacks of choice and read on.

The Opus 88 demonstrator has been on my ‘think about’ list since I first saw it reviewed a while back, but even though it made the list I still had reservations.

Primarily, whilst I own pens that can be converted into eye droppers my only real experience with an eye dropper had been the Moonman M2; a pen I really do like and one which offers an affordable way into the world of eyedroppers.

So, moving up to the Opus 88 is quite a jump; whilst the M2 is a very affordable pen the Opus 88 feels like a much more serious commitment coming with a much heftier price tag, which is how it ended up on the ‘think about’ list.

After reading every review I could find on the Opus 88 range and watching them go in and out of stock I finally decided to take the plunge and ordered one from Cult Pens.

If you follow the Cult Pens link you will see the range of Opus 88’s available, many of them designated as a ‘Koloro’ version; however, the thing to be aware of is whilst all Koloro’s are eye droppers, they are not all the same. The demonstrators are the biggest pens in the Koloro range, and they are big pens; the image below shows you how they stack up against a TWSBI Eco.

The pen arrived in a large box, to give you an idea we are talking about it has a footprint just shy of A5. The box is a black with a leather effect, it is Opus branded and has a magnetic closure and is tucked into a branded white card cover.

When you open the box your pen and the eye dropper are set in a piece of custom cut foam with a small instruction leaflet added to the box and that’s everything. I had read a review or two where concerns were expressed that there were no spare o-rings included that could be used to replace the one that acts as the seal between the section and the barrel should it ever fail.

This bothered me to so I wrote to Jingi.com (the company that makes Opus pens) and asked if I could either order a couple of spares or have the spec to track them down myself. I got a reply within a day offering to send me some at no charge; not even postage, which I would have happily paid.

Anyway, back to the pen, which I soon had it in pieces; the pen breaks down into three main components, the cap, the barrel and the section. The nib, I believe is a Jowo, is also removable but I chose to leave that alone.

The cap is well made, and the finial is clear and very nicely polished whilst the remainder of the cap has a lightly frosted finish. Inside the cap is a two-part chamber; the upper chamber is where the nib lives when the pen is capped and is narrower than the lower chamber where the acrylic part of the section resides. This has the advantage of creating a sealed chamber for the nib which prevents it drying out when not in use and, to date, I have not had a hard start.

Along the bottom edge of the cap, centrally below the clip, is printed Opus 88 using their art deco styled font.

Lastly the clip; it is a good strong clip that is secured between the finial and the main body of the cap and is painted matte black. The only problem I have noticed with this is that the paint seems to scuff quite easily.

Other reviewers have commented on the number of twists it takes to remove the cap, and whilst it does take a few more than normal I don’t think it’s anything to worry about.

Moving on to the barrel, it has a frosted ink chamber and below this is the piston mechanism and a polished finial, which is where the eye dropper gets interesting. From what I have read this is what is known as a ‘Japanese style eye dropper’ having a piston that opens and closes the barrel to either release ink to the feed/nib or to close the barrel and prevent the ink flowing to the feed/nib. The piston is controlled via the finial that acts as a knob for the piston.

When I first got the Opus 88 the barrel finial was quite stiff and ‘creaked’ a little when it was being wound but that is now a thing of the past and it is quite smooth and the creaking of acrylic on acrylic has gone. I normally keep my piston in the closed position, but even in the closed position there is sufficient ink in the feed to write a few lines before you have to open the piston.

Lastly and by no means least, the section. As with other parts of the pen the section is a mix of frosted and clear acrylic; the latter is just above the thread that connects it to the barrel. It is very comfortable to hold, and my finger rests happily against the raised ridge at the nib end.

I opted for the Medium nib and I was a little sceptical that it would be as smooth as other reviewers had claimed but they are right; this nib just seemed to float over the paper when I tested it in a Muji notebook. The feed delivered a consistent flow of ink allowing the nib to put down a nice strong line, a little on the wet side but that may have just been my choice of ink.

So, filling this pen for the first time was quite an experience, here are my 10 steps to filling your Opus 88.

Step 1: Get your Opus 88 and filling device; in my case a 6ml syringe with a Blunt Fill Needle, these are a good investment as they are excellent for filling convertors, refilling cartridges et cetera. 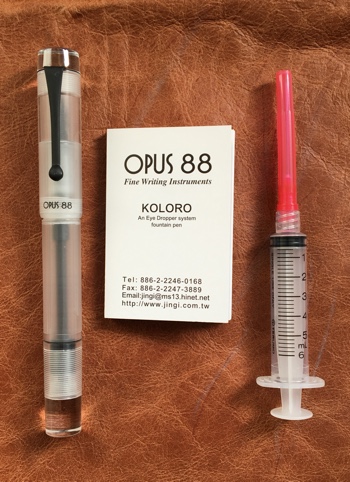 Step 2: Choose your ink, this pen holds a lot of ink so this is not a decision to be rushed because you will be living with this choice for quite a while.

Step 3: Final choices, you will need a suitable beverage while you ponder your final decision.

Step 4: Decision made, for me it was Diamine Regency Blue.

Step 5: Disassemble the pen and prepare to load.

Step 6: Load the syringe, I loaded mine with 4ml of ink.

Step 7: Using the syringe gently fill the barrel to the desired level, I filled mine up to the threads and this used exactly 3.2ml ink.

Step 9: Open the piston up to allow the ink to flow into the feed, I found gravity was the easiest way to achieve this and stood my pen on its cap, nib down. 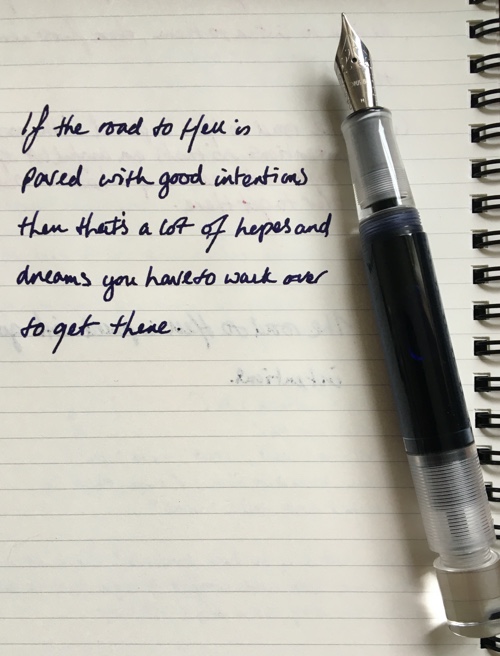 The big question is ‘What’s it like to use it?’

There is no doubt about it this is a big pen and it takes some adjusting to, but what makes it easier is that his is lightweight pen and it has a very good nib that really does float across the page. It is worth noting that the Opus 88 is also a wide pen coming in at about 15mm and I found that I had to adjust my grip to allow for this otherwise my hand soon started to ache.

Once I’d got used to the pen, I found it a pleasure to use and along with my Franklin Christoph Model 02 it has taken up permanent residence on my desk; which for a pen I’ve only had for a short while is a very good sign.

The really big question is ‘Is it worth your pennies?’

I think it is, I had reservations about putting down £95.00GBP/$120.00USD and even considered returning it, but I’m glad I didn’t; if I’d done that, I’d have missed out on a wonderful pen.

6 thoughts on “The Opus 88 Demonstrator”