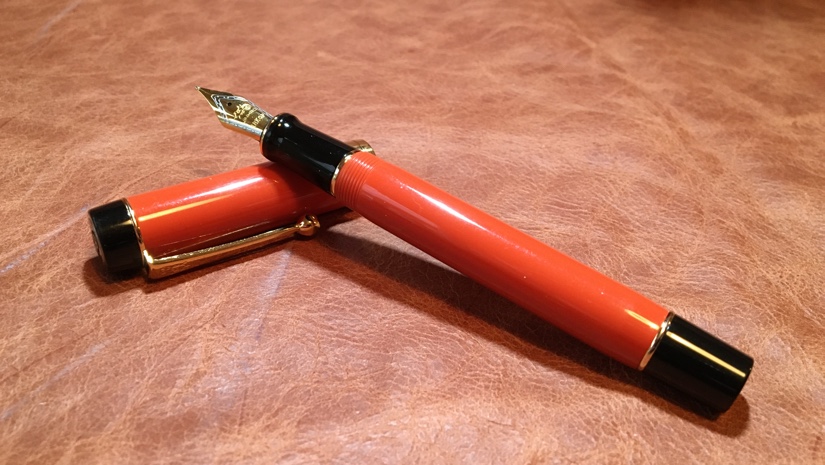 I’ve wanted, for quite some time, to own a Parker Big Red Centennial, for me it is the epitome of the classic Parker Duofold and even though the price fluctuates wildly on Amazon it never goes wild enough for me to pull the trigger; so when I saw that Jinhao had produced a ‘homage’ to this great pen I placed my order and waited.

Owing to a quality control issue (my eBay seller warned me about this and said there would be a delay) I waited quite some time but eventually the pen arrived.

My first impressions were very positive, for a budget pen it is very well made and finished, in fact I’ve never had a bad Jinhao pen, so my expectations were high and Jinhao did not disappoint.

So before I ramble on any further I will take you on a tour of the pen starting with the cap, moving on to the barrel, then the section followed by the nib and finally finishing at the converter, so here we go.

Starting from the top the cap has a black finial which contrasts nicely with the brick red coloured body of the cap. On the top of the finial is a ‘blackened’ silver coloured disc that has been polished to reveal Jinhao’s chariot logo.

The finial and the body of the cap are separated by the gold coloured trim ring which forms part of the clip. This is standard ball ended clip with the Jinhao logo embossed at the finial end, the clip has a firm grip but is not overtight which means it should be good in all circumstances.

The cap finishes with a wide gold centre band divided into three by the engraving which is only the company name (no model number on this version). Inside the cap there is no inner slip cap to prevent drying out, however, the cap does screw securely to the barrel which should help to prevent drying out.

The brick red barrel tapers gently towards its finial which like the one on the cap is black however, this one does not have the Jinhao logo on it, instead it is plain with a slim trim ring separating it from the main body of the barrel.

The inner and outer threads are well cut and finished and whilst not flat threads they are very smooth which means they do not cause any discomfort when writing.

The section appears to be made from brass with a black plastic grip which has a trim ring at either end; from which I was able to unscrew the nib, with relative ease, for cleaning.

Jinhao nibs are generally very good and this one is no exception; it is a two-tone gold/silver mix that is nicely engraved and Jinhao branded; it is very smooth to use, and the feed provides a steady flow of ink which meant when testing it I got consistent lines and text.

Last but definitely not least, the converter. Over the years I have noticed a positive improvement in the design and build quality of Chinese converters and this one is no exception. It is a push on version rather than a screw on and it fits tightly making a good seal.

Overall this is a good pen; it is very well made for this price point (around £14.99GBP), Jinhao have used good materials and have not skimped on either build quality or the finish of the pen, both are very good.

I tested it with Diamine Oxford Blue for a couple of weeks and had no issues with hard starts, skipping, drying out or leaking, all in all it is a very nice pen to use.

So, as always, is it worth your pennies?

I found it to be a reliable well designed and built pen that you could take anywhere. It’s excellent value at this price and the advantage of a good quality budget pen is you can afford to buy more than one if you want to; I do think if you order one of these it will be a pen you will like and it’s one I’m very happy to recommend.